WINGHAM – Approximately 200 participants braved the rain to walk/run/stroll/bike in the Wingham Terry Fox Run on Sunday morning. Another 175 donated online before the event at https://run.terryfox.ca/3139, where donations are still being accepted until the end of the month.

Steve Jackson and Scott Miller were first-time organizers, taking over from Dale and Linda Edgar, who started the Terry Fox Run in Wingham 34 years ago. A ceremony marking their volunteer milestone, including a letter from Fred Fox, Terry’s brother, and a gift from the Terry Fox Foundation highlighted the pre-run ceremony.

Organizers said the 2022 Wingham Terry Fox Run on Sept. 18 would not have been possible without the support of local businesses that donated their time, food, and money. Among them, R.J Burnside and Associates, Marks Brothers Auto Body, Fogal’s-Your Independent Grocer, Foodland-Wingham, Tim Hortons – Wingham, Howick Insurance, and the Homegrown Food Basket, to name a few. 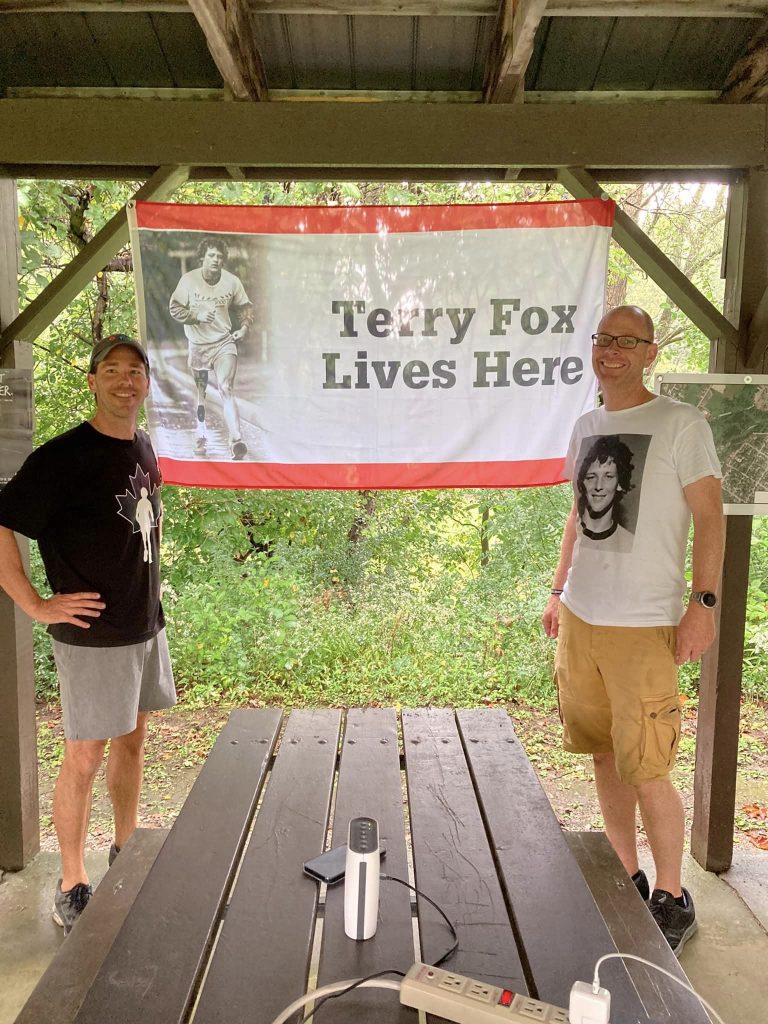 The 2022 Terry Fox Run in Wingham was the first run hosted by new event organizers Scott Miller and Steve Jackson, who took over the responsibility from the former long-time event coordinators Dale and Linda Edgar. (Submitted photo)

Lastly, the Wingham Terry Fox Run would not be possible without the families and fundraising teams that show up, year after year. A few teams of note, Team Newson, in honour of Dean Newson; Taylor’s Team, in honour of Taylor Mann; and Ange’s Superheroes, in honour of Ange Chester, who raised a combined $7,500.

This was the first in-person Terry Fox Run in Wingham since 2019.

“We are over the moon with the support from the community. The enthusiasm and support for this event is amazing,” Scott Miller, Wingham Terry Fox co-organizer said in a release. “Dale and Linda Edgar have laid a foundation for Steve and I to follow. Our goal is to continue the great tradition they have started in Wingham, while honouring those we’ve lost to cancer, celebrating those that survived and are fighting cancer, and carrying on Terry’s legacy, to try and eradicate cancer from the world.”

“Our new registration volunteers handled the 10:30 a.m. rush like seasoned pros. We can only hope to carry on this enthusiasm into next year, and beyond. Thank you, Wingham and area,” Miller added.

The Terry Fox Foundation has raised over $850 million over the past 42 years, to fund over 1,300 unique cancer research projects.