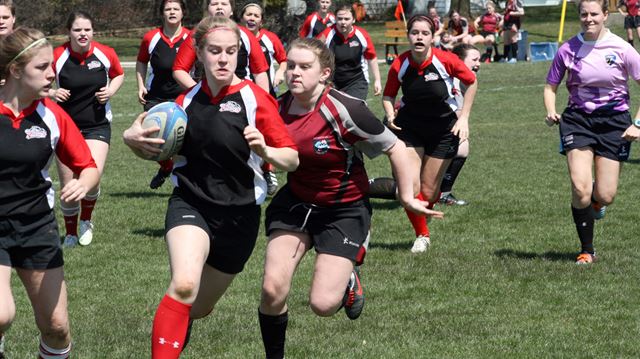 South Huron District High School (SHDHS) girls rugby player Maria Robinson tries to get the ball past the Stratford-Northwestern players during a pre-season rugby tournament April 15 at South Huron. The girls' first game of the season will be April 27 against St. Anne's.

EXETER —  After a pre-season tournament to warm up, the South Huron girls rugby team is ready to start off the season.

The tournament was a round robin with each team playing each other once. In the end, St. Anne’s led in scoring, followed by Stratford Northwestern, SHDHS and Walkerton.

The SHDHS girls lost their first game to St. Anne’s, won their second game with Walkerton, and then lost their third game against Stratford Northwestern.

“The pre-season is a great learning experience for the rookies who are seeing a game for the first time,” said rugby coach Rob Krainz.

The SHDHS girls rugby team is a varsity team with players from Grade 9 up to Grade 12. This year’s team of 21 players includes six rookies.

Krainz was impressed by the performance of rookie players Phylicia Krainz and Aislinn Clarke who both played full time in all three games.

“Maria Robinson, she’s another one who really stood out. She’s a good, fast runner. She can move the ball well, yet is still big enough to make huge tackles. The same with Phylicia. Good and fast.”

South Huron player Kathleen Gregus sat out most of the tournament because of a leg injury she sustained in the first game.

Her coach advised her not to push it, since the pre-season tournament doesn’t actually matter in the regular season.

Krainz also wanted to be sure Gregus didn’t risk aggrevating her injury, since she’s not only a senior player, but his fastest runner.

“I told her not to wreck it. It’s only pre-season,” he said.

The real season will begin for the South Huron girls April 27 with a home game against St. Anne’s.