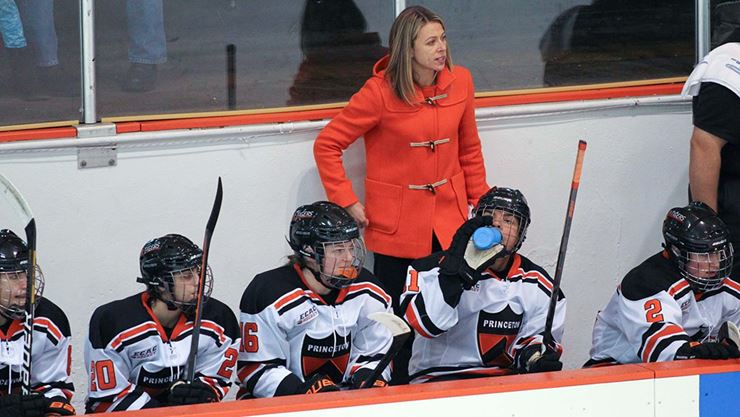 Earlier this month, Princeton University announced that Cara Morey would be taking over as head coach of the Princeton Tigers women's hockey team. Morey has spent the last the last six season coaching behind the Princeton bench as an assistant. Pictured above, Morey stands behind her players as an assistant on the Tigers' bench.

PRINCETON, N.J. – Princeton University may not seem relevant to the Times-Advocate’s coverage area, but the school has recently appointed Cara Gardner Morey as head coach of their women’s hockey team.

Originally from Hensall, Cara is no stranger to the game of hockey. In fact she made her way down to the United States when she was recruited to play hockey and attend Brown University in Providence, Rhode Island.

This came just after her graduation from South Huron District High School, and time with the London Devilettes women’s hockey team in London. From there on, she would spend four seasons playing defence for the Brown University Bears and for the school’s field hockey team while taking a course in human biology.

“It was a totally different world,” Cara said about moving to Providence from Hensall. She would meet her husband Sean Morey at Brown, a wide receiver/special teams player on the Brown Bears men’s football team.

After her time at Brown, Cara continued her hockey career in the National Women’s Hockey League where she played for two teams, the Montreal Wingstar in 2001-02 and the Brampton Thunder during the 2002-03 season.

Cara stepped away from hockey temporarily to join her husband who had been drafted by the National Football League’s New England Patriots. Sean played for the Patriots, Seattle Seahawks, Pittburgh Steelers, Philadelphia Eagles and Arizona Cardinals before retiring in 2010.

Once her husband had retired, Cara said she decided to get a job of her own after a couple of years as a stay at home mom. “I just said I think it’s my turn to get a job and I was looking at whether I was a teacher, and I’d always been interested in coaching, so I was thinking it might be something I wanted to do as a career,” said Cara.

Officially her coaching career began at Robert Morris University when she was an assistant with the school’s National Collegiate Athletics Association (NCAA) women’s hockey team, but she was a head coach of the midget level Phoenix Ladies U19 team in Arizona from 2009-2011.

“My college coach from Brown called me and told there was a job at Princeton and I’d be great for it, so I applied while living in Arizona, went for the interview and they decided I would be a great coach and I got the job as an assistant,” she said about getting on at Princeton in 2011.

For six seasons Cara worked alongside Jeff Kampersal who had led the Princeton women’s program for 21 seasons until his departure at the end of last hockey season. When Kampersal left, Cara was promoted to the head coaching position.

She says she spends a lot of the offseason recruiting female hockey players in part of the U.S. and even in Ontario. Coaching at the NCAA level isn’t all Cara has listed on her resume, as she was an assistant with the Team Canada U18 that won silver at the World U18 International Ice Hockey Federation World Hockey Championships in 2016.

Cara spent most of her childhood playing a variety of sports in her community and at SHDHS. She even recalls a time when she’d been a part of eight different high school sports teams and the Times-Advocate interviewed her. A lot of her childhood was spent playing ringette in Exeter and London prior to her committing to hockey full time when she was 17 years old.

Now at 38, the new head coach of the Princeton Tigers women’s hockey team says she is looking forward to the challenges that come with her promotion.  “I love hockey, it’s my passion. Sports are everything to me,” said Cara. She added that she is a teacher behind the bench who likes to get the most out of her players through process orientated methods.

One of the reasons she says she enjoys living and working in Princeton is because it reminds her of where she grew up in Hensall. Cara says that even though the population is larger at 20,000 the city has a large agricultural community.

Cara has not visited Hensall in a few years and her family has since moved to different parts of Ontario.

As for the remainder of the offseason, she says she will spend time travelling to recruit more and time with her husband and their three daughters, Devan, Kate and Piper – who also happen to play hockey.