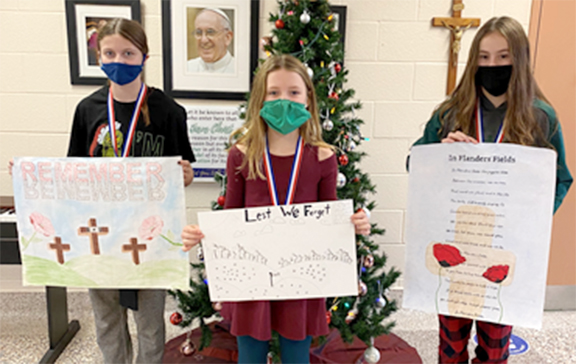 There were two first place winners from Immaculate Conception School in Formosa: Taylor Wilkins for Intermediate Black and White Poster, and Avery Haight for Junior Essay. The school also had two entries placing at the other levels.

Elloise Potts from Mary Immaculate, Chepstow placed first in Primary Black and White Poster, and the school also had one second and two third place entries.

There were no entries from Walkerton District Community School.

The 10 first place winners moved onto the Zone Level to compete against entries from 13 Legion Branches within an area from Dundalk to Walkerton to Listowel.

Sydnie Hayes, representing the Walkerton Legion, placed first in the Intermediate Colour Poster category. Sydnie’s entry has now moved onto the District Level competition, which will take place in January. Avery Haight placed third at the Zone Level in the Junior Essay category.

Last week I mentioned municipal staff members are creating a storyboard on their website to show where veterans are buried in Brockton’s 26 cemeteries. In addition to the two Walkerton cemeteries, we have found 13 in Douglas Hill Cemetery, 11 in Starkvale, and five in Purdy Cemetery.

At this time, Branch 102 still anticipates partnering with the municipality to host our New Year’s Day Levee, as long as COVID restrictions permit.

The next round of Catch the Ace tickets will go on sale Jan. 9, with the first draw on taking place on Jan. 17.

Jan Briggs-McGowan is a member of the Walkerton Legion. Her column appears here weekly.