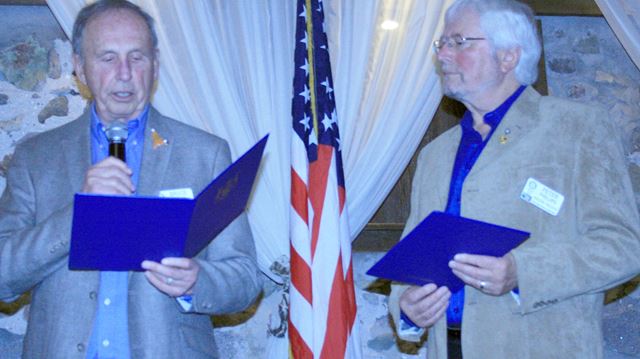 GRAND BEND — It was a time to celebrate past accomplishments and look to the future, as well as have a lot of laughs, at the 25th anniversary celebration of the Rotary Club of Grand Bend last week.

A celebratory dinner was held at Hessenland Country Inn north of St. Joseph on May 3. In attendance were current and past members of the Grand Bend Rotary Club — as well as other clubs — along with dignitaries and guest speaker Neil Aitchison, well known in the area for his work with the Huron Country Playhouse.

Current Grand Bend Rotary Club president Peter Phillips noted last week that it was 25 years ago to the day that the club was chartered in 1991 at Oakwood with 37 members. Phillips credited Don Prowse and Tom Lawson as the main initiators of the club, which was sponsored by the Rotary Club of London. Former Ontario Premier Bill Davis served as guest speaker at the club’s first meeting.

Phillips noted some of the many projects Rotary has been involved with over the past 25 years, including the Rotary Trail along Highway 21, the Grand Bend medical centre, beach enhancement, new seats at the Huron Country Playhouse, Lake Huron clean water monitoring, support to many local groups and the upcoming unveiling of the new permanent community stage at the beach in Grand Bend.

The group has also been a strong fundraiser for international polio initiatives, as well as global literacy and shipping containers full of school supplies to South Africa. Also, Rotary’s annual Autumn Indulgence celebration has raised more than $1 million. Phillips announced that this year’s Autumn Indulgence will be held at the new Dark Horse Estate Winery beside the Huron Country Playhouse at the end of September.

Charter members and past presidents were recognized at last week’s celebration, and Phillips noted Randi Ivey and Bryan Beattie were winners this year of Governor General’s Caring Canadian Awards, while both Ivey and George Shaw received Paul Harris Awards. Shaw, it was noted, has 58 years of uninterrupted service with Rotary.

“You have made a difference,” she said, adding lives have been improved because of the efforts of the Rotary Club. She said the club’s legacy is significant and commendable.

Former Grand Bend Rotary president Bruce Shaw served as masters of ceremony for the evening and paid tribute to the individuals who helped get the club started. Many members of the Goderich Rotary Club also attended the event, and Rotarians from as far away as British Columbia and New Jersey were on hand.

Lambton Shores Mayor Bill Weber thanked the club for all it does and he noted many great things happen in the community due to partnerships. Local MPs and MPPs sent certificates of congratulations to the club.

Popular speaker Neil Aitchison, a founder and performer with Drayton and Entertainment and a Rotarian, served as guest speaker, and said the club has done amazing things in the community.

“I love Grand Bend,” he said, adding he’ll be back performing at the Huron Country Playhouse this summer in “Canadian Legends,” in which he will reprise his popular role as RCMP officer Archibald F. Inkster.

Aitchison encouraged the audience to laugh and enjoy every day.

“Laughter is phenomenal. It’s terrific for us,” he said.