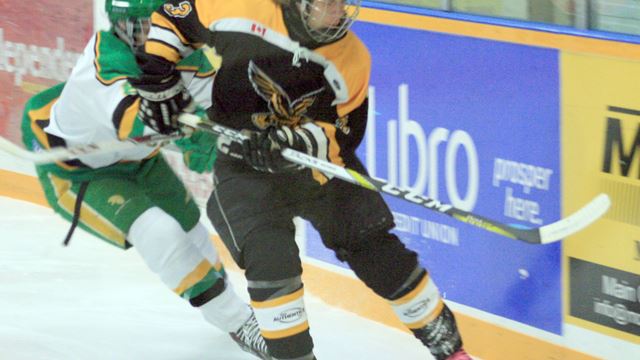 Exeter Hawk Macgregor Allen fights for control of the puck Sept. 30 during Exeter's 10-2 victory over the Thamesford Trojans Sept. 30. The Hawks won 10-2. Exeter went on to play against North Middlesex on Oct. 1, and they won 4-2.

EXETER —  The Exeter Hawks have gotten off to a strong start this season, with four wins so far and their only loss being to Aylmer.

The Hawks started off the weekend on the right foot by defeating the Thamesford Trojans 10-2 on Sept. 30.

On Oct. 1, the Hawks took on the North Middlesex Stars and won 4-2. Hawks Conner Drager scored first in the first period, assisted by Frook and Melady. Austin Carter scored again for the Hawks on a power play, assisted by Bannon and Frook.

In the second, Exeter’s David Norris and Melady made the final scores for their team.

A scoreless third period followed before the game ended.

As good as Exeter’s record is so far this season, the Hawks are still only sitting in fourth place in the PJHL Yeck Division standings.

League favourites the Dorchester Dolphins are currently in the lead on an undefeated five team winning streak, with Aylmer and Lambeth close behind.

The Hawks and the Dolphins will clash Oct. 7 at the South Huron Recreation Centre. The support of every cheering fan could make the difference as these two top tier teams try to tear each other down.