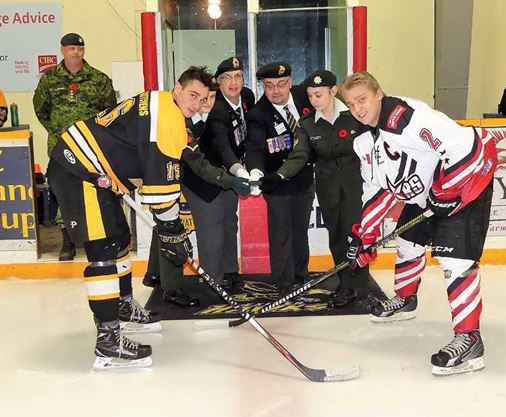 EXETER – The Exeter Hawks have been a busy hockey club over the last couple of weeks, having hit the road for three games over the weekend of Nov. 3-5.

The Hawks were forced to hit the road for a three game road-swing as the Bill Batten Tournament took place on the same November weekend.

During their road trip, the Hawks played against the Thamesford Trojans, Dorchester Dolphins and Mt. Brydges Bulldogs.  Two losses and a win were what the Hawks could muster up during their three back-to-back games.

Friday night was the Hawks’ only success, and they came out of Thamesford with a 5-2 win.

Even though the Hawks were outshot 42-27, Exeter capitalized on their scoring chances. The team got goals from Nolan Koetsier who had a hat trick, Tyler Merner and Liam Melady. Nathan Young made 40 saves to get his sixth win of the season.

The Hawks’ lone goal came from veteran Christian Petrozza who made his season debut with the club for the first time this season. Petrozza picks up where he left off last season, as he led the way for the team in 2016-17. The 20 year old forward from Everett, Ont. led all Hawks players with 55 points last season, but has committed to working in Etobicoke as part of the program he is enrolled in at Western University.

This season is Petrozza’s fifth season at the Junior C level, and his third with the Hawks. In his first two seasons, he played a combined 39 games for the Mt. Brydges Bulldogs.

If Petrozza remains with the club for the remainder of the 2017-18 season, it will mean the Hawks will get some added offence.

Petrozza was again in the lineup when the team travelled to Mt. Brydges on Sun., Nov. 5. Three games in three days would take a toll on most sports teams, seeing as the only sport where that sort of scheduling takes place is at the professional baseball level. However, the Hawks would enter the Tri-Township Arena looking to avenge their loss from the night before.

While it was not for a lack of effort, the Hawks came up on the losing side of a 2-1 game, but the team managed to fire 81 shots on net. Their 81 shots on goal are a team high this season,  but Bulldogs’ goaltender Logan Vermunt turned away all but one. Vermunt, 19, of London’s save percentage of .937 has him placed among the top of the Provincial Junior Hockey League goaltenders who have played fewer than 10 games this season.

In their loss to the Bulldogs, the Hawks’ lone goal came from Adam Gibb, who scored just 4:40 into the first period.

Five days off after a pair of losses gave the team a spark when they hosted the North Middlesex Stars last Friday night.

8-0 was the final score, with the Hawks coming out on top. Exeter scored four goals in both the second and third periods. Goals were scored by Melady, Baker, Merner, Gibb (twice), Bannon and Petrozza who also had a two goal game.

The club took their win into Saturday night’s game against their Highway 4 rival the Lucan Irish. Last time the two teams met, the Hawks lost 4-3. In their Saturday meeting the Hawks won 5-2, improving their overall record to 12-6-0-1.

Bannon and Baker put up three points each, while Petrozza added a goal and an assist to give him points in  three of his four games this season. Goaltender Dane Gubbels posted his sixth win of the season and stopped 28 shots in the process.